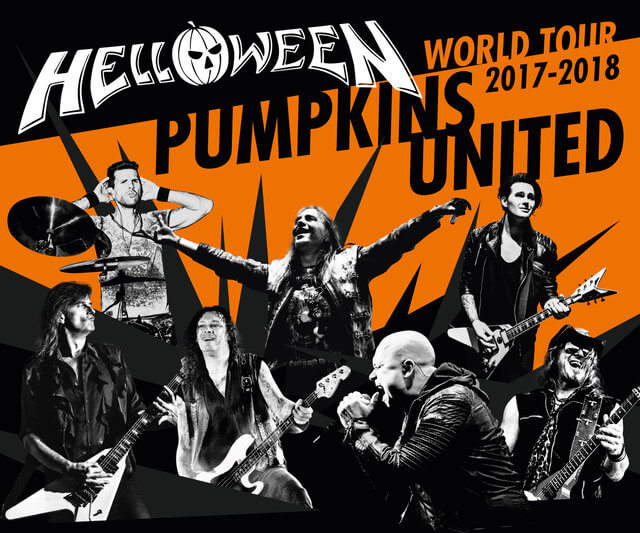 Michael Spiess has the task, honnor, and opportunity to work as FOH Sound, – and Recording Engineer for the german band HELLOWEEN ! Now around this special “Pumpkins United World Tour” with original line up:

Here comes the sensation for all HELLOWEEN fans: You believed in it for years and continued to ask for it – now is the time: In fall 2017, Michael Kiske and Kai Hansen will once again mount a HELLOWEEN stage together and resurrect the band’s legendary original line-up.
It’s official: Weikath, Kiske, Hansen, Grosskopf are going to play HELLOWEEN classics live and on a joint tour.  Under the flag PUMPKINS UNITED all pumpkin heads will step up – meaning Andi & Michi on vocals, Kai & Weiki & Sascha on guitars, and Markus & Dani in the rhythm section.

Undisputedly, HELLOWEEN are one of Germany’s most respected metal exports and considered the founders of German melodic speed metal. As godfathers of the genre, they have grown to become one of the most influential metal bands of the planet. In an unbelievable career reaching back as far as 1984, HELLOWEEN have performed at innumerable metal festivals around the globe such as Rock in Rio, Loudpark in Tokyo, Wacken, or the Woodstock in Poland, which they headlined in front of over 500,000 fans.

The super tour takes the full PUMPKINS UNITED World Tour entourage across selected cities and venues in Latin America, Europe, Asia, and the US. An extremely big deal, which, including a few secret surprises, will present almost three hours of the biggest hits from three decades of HELLOWEEN as the band will obviously insist on performing a full-speed trip through the HELLOWEEN repertoire.

»We already had an awesome time on the Hellish Rock part 1 & 2, but this time we’ll definitely double down on it« says Kai Hansen, and Markus Grosskopf adds: »There’ll for sure be songs that we haven’t played in a very long time or even ever before.« Whoever doesn’t secure tickets for this tour, probably doesn’t have all their pumpkins in a row: The original line-up wants to celebrate a global party with you, which is also going to be highly emotional because this SPECIAL WORLD TOUR is actually not a reunion and most probably won’t happen again. Andi channels our metal hearts when he says: »I’m so much looking forward to playing Michi’s and my tunes together with him live on stage. It’s going to be absolutely exceptional.«